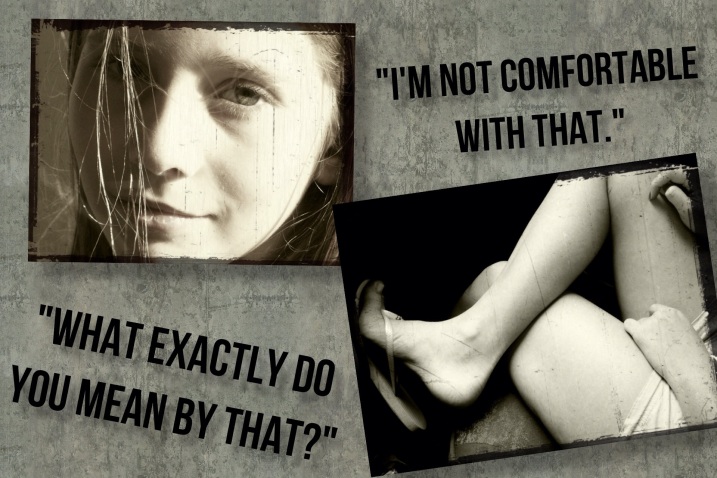 I met some friends for dinner and a book signing last night. At dinner, a friend recounted a recent conversation she had had with someone who was round aboutly (and absolutely) slighting a group of people.

She talked about the moment she could tell it was going in the wrong direction and how helpless she felt to stop it (she DID stop it, but not quite as gracefully as she wished).

Everyone at the table commiserated and spoke of how they wished they had simple words to quickly end conversational train wrecks about to happen, “without being rude”.

As we were sitting there, one woman spoke up and said “That reminds me of something I read about situations like that.”

– to say “Exactly what do you mean by that?”

And it reminded me of a friend (Laurie) from whom I learned a valuable lesson a few months ago when I heard her say “I’m not comfortable with that,” in a completely adult and fairly innocuous way – whatever it was, she just did not want to do it – and made it crystal clear in a very graceful way; a way that put no one on the defensive…she just did not want to do it…..(as I recall, it was about a guest list and excluding someone).

Both phrases convey strength, calm, self confidence and “You might want to drop where you’re headed with this right now & and I have now removed myself from this conversation.”

When I think back on all the jams, embarrassment, dangerous situations and self doubt that could have been averted in my life from age 14 – 28 (I got better at standing up for my self around 29) , had I only uttered one of these beautiful, straight forward and strong sentences…..at the moment my gut told me something was amiss!

Commit these to memory and teach your daughters:

(I’m not thinking sons so much because guys have their own ways of dealing with these things – and they don’t care about being rude – they just deal with it and move on….I envy them.)

Is it just me? Looking back on your teenage years (and beyond), could these two sentences have helped you out of some situations forcefully and/or gracefully? Any other favorite phrases I should know about?….so I can add them to my arsenal!

One thought on “I’m not comfortable with that.”