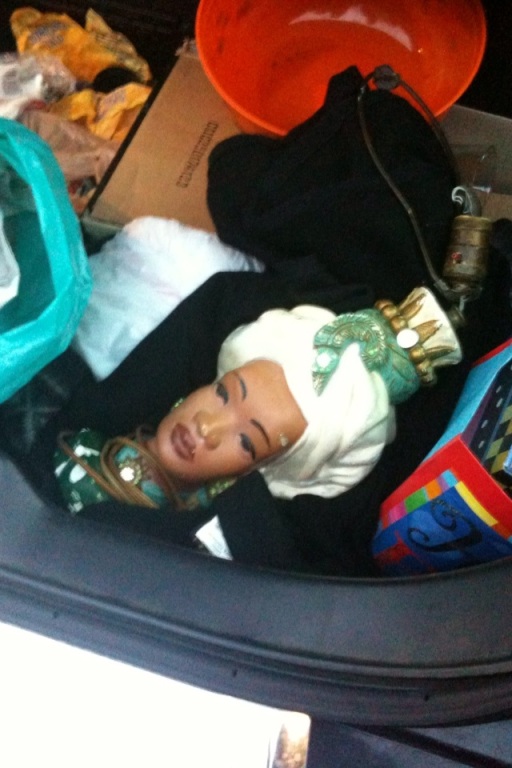 Ok, so I found this COMPLETELY AWESOME lamp in a consignment store in a small town east of Albuquerque.  Some friends and I had “road-tripped” (a friend of ours who owns an “Party Planning & Events ” company planned the day to a town 45 minutes east of Albuquerque…..in a limo — (it helps to have friends in high places….or friends who plan things for people in high places!  Ha!) )  It’s an old mining town and we went for lunch and to “look around” in some stores.

In one of the stores, my friend Marci passed this lamp and said “If Eleanore sees that, she’ll buy it.”  Another friend said “Oh I HOPE not! Should we hide it?”….Marci: “No! We can’t hide it!…but she will buy it.”

As I descended the stairway,  I saw HER (the lamp) – the clouds parted – angels sang – she spoke to me – SO trashy that she tips the scale into the “awesome” category and I HAD to buy HER for $15.00 – making one of my friends very worried about my sanity. We loaded her in the trunk with all of the other “finds” from the day and she sat in my studio for months – until one day I had finally had enough! I had to give her the respect she deserved!

I searched YouTube for videos about how to rewire a lamp.  I found a completely objectionable one (see the bottom of this post ….WTH?)  and a completely wonderful one whose narrator is my new boyfriend (he cannot be my husband because I am happily married, but he can be MY JUSTIN BEIBER OF LAMP RE-WIRING — AND HE IS!!!). I love this guy! 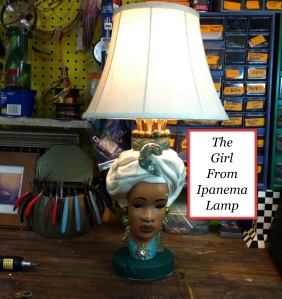 I rewired her, patched the chips on her base and replaced missing rhinestones in her ears and on her neck – and now she is again truly regal and sits on my desk in my studio!  – A testament to decades gone by and what was once “fashionable”!  I love her because she is so hideously tacky and overdone …so much so – that she is fabulous – like Las Vegas! And I love her because she will always remind me of the wonderful day with my girlfriends!!

Now for my FEMINIST APPROACH TO RE-WIRING A LAMP! Don’t watch the video below.  That is my Feminist approach. Watch the first video and not the one below.

Offensive video: How to Rewire a Table Lamp: A Course for Women.   — I kid you not – click the link and see (even though I just told you not to watch this video).  Here are some of the choice quotes from this video.  Am I being sensitive? I think not!

1. “Even if you have a partner who can do the rewiring, sometimes you end up waiting a looong time to get the job done – know what I mean ladies?”  Cue music track “wah wah wah wah” & picture of a guy asleep on the couch.

2. “Notice that one screw is bronze and the other one is silver. Remember that! We’ll talk about that later. Ok, now pause this video and pair up into teams and dis-assemble your lamp!“

PAIR UP INTO TEAMS?????  Really? Do we really need to pair up into teams to REWIRE A LAMP!?!?  I just want to know how to rewire a lamp for God sakes!   The only reason I watched the whole video was to make sure it wasn’t a joke….unfortunately, it is not a joke. It is serious and is narrated by a WOMAN who sounds like she is speaking to Kindergarteners, which makes it even worse!

Have fun rewiring your lamp – by yourself!